The Red Hat Society - 'Further Down the Rabbit Hole' 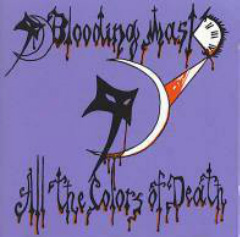 RED - "To denote blood, especially in a beheading due to the huge amount of blood that comes forth from the severed arteries and veins of the neck including the carotid and the jugular."

Also represents the white 'cap' worn by those sentenced to beheading which turned a vivid red, as noted in the story of Anne Boleyn:

"Her coif was now replaced by a white cap.  She knelt on the platform and prayed with her chaplain.  When she had finished, one of her ladies in waiting blindfolded her with a large handkerchief. All was now ready and the headsman took up the sword and beheaded her with a single blow..."


"He will be made to don the Red Top Hat" is a euphemism used for "beheading" in Nabokov's Invitation to a Beheading.

Beheading is also mentioned several times in the Bible, and plays a role in End Times Prophecy:

"And I saw thrones, and they sat upon them, and judgment was given unto them: and I saw the souls of them that were beheaded for the witness of Jesus, and for the word of God, and which had not worshipped the beast, neither his image, neither had received his mark upon their foreheads, or in their hands; and they lived and reigned with Christ a thousand years."


PURPLE - After death the body turns purple, as in this description of a 'Hanging' -  ..."You go purple and swell up in the face and neck then die."

(Why Purple? - Blood stops circulating, and after the cells have used up all the oxygen, the blood turns blue, making the flesh turn a bluish-purple color - Just as when circulation is cut off to a finger temporarily, for example.)


This should give pause for great concern.  The ungodly of this world place a high emphasis on symbolism -, including that of color - believing it aids in bringing about their evil purposes.

They must love it when all of these 'old ladies' are wearing the 'colors of death'.


"The Red Hat Society’s primary purpose is social interaction and bonding among women." - 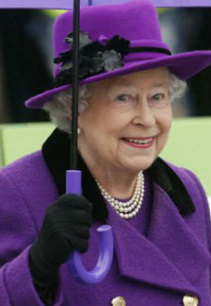 COLORS OF THE CRONE
The Crone -


The crone is often a character in folklore and fairy tales, usually an old woman.

In some stories, she is disagreeable, malicious, or sinister in manner.

She often possesses magical or supernatural associations that can make her either helpful or obstructing.

The Crone is also an archetypal figure - a Wise Woman.

She is marginalized by her exclusion from the reproductive cycle, and her proximity to death places her in contact with occult wisdom.

The word "crone" is a less common synonym for "old woman," and is more likely to appear in reference to traditional narratives than in contemporary everyday usage.

The word became further specialized as the third aspect of the Triple Goddess and subsequently in some forms of neo-paganism, particularly Wicca.

In Wicca, she symbolizes the Dark Goddess, the dark of the moon, the end of a cycle.

In New Age and Feminist spiritual circles, a "Croning" (a RED-uation?) is a ritual rite of passage into an era of wisdom, freedom, and personal power.

The Crone is often depicted wearing the color Purple: 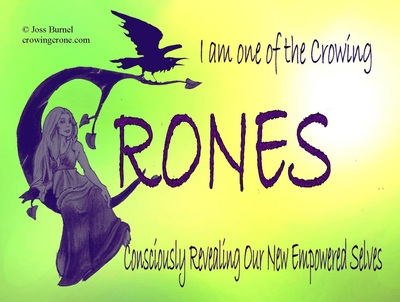 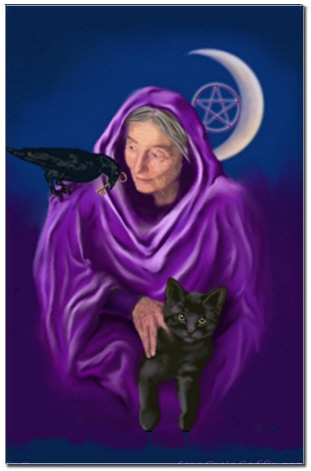 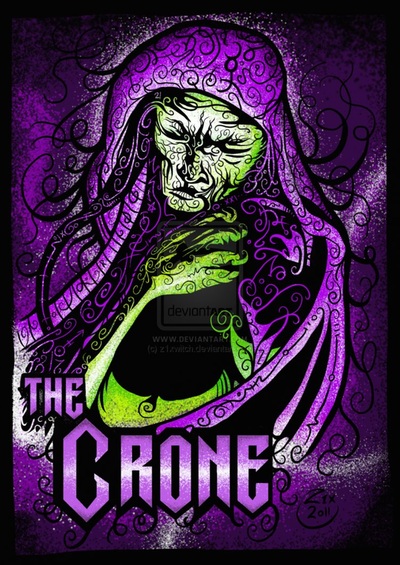 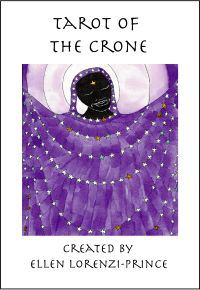 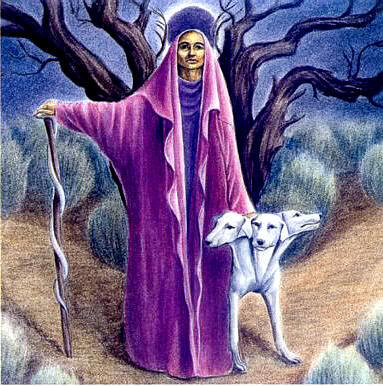 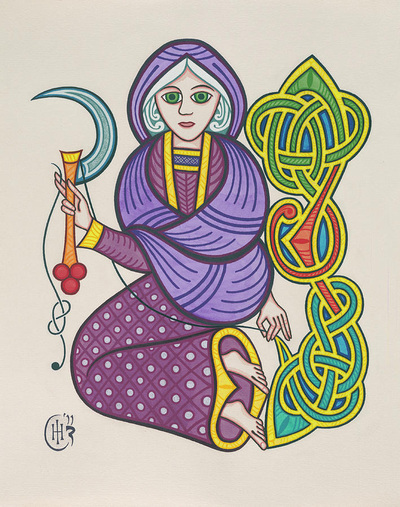 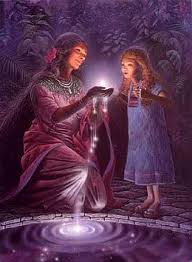 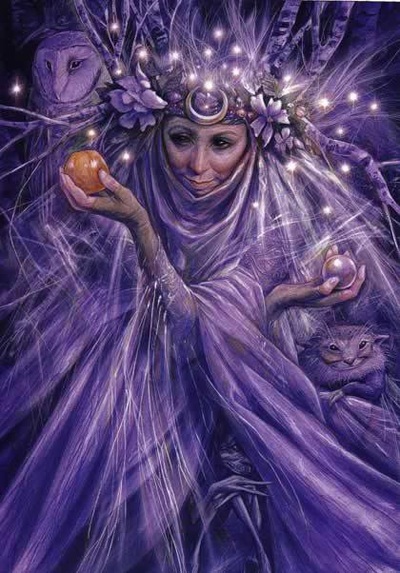 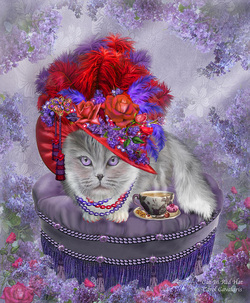 THE CAT: A 'FAMILIAR SPIRIT'
Rebellion is as the sin of Witchcraft


and stubbornness is as iniquity and idolatry. Because thou hast rejected the word of the Lord, he hath also rejected thee..."


The foundation and premise of the Red Hat Society is not scriptural. It stands in direct contrast to the command given to 'aged women' in Titus 2:3-5 -


"That they be in behaviour as becometh holiness, teach the young women to be sober, ...be discreet, chaste, keepers at home, good, and obedient..." 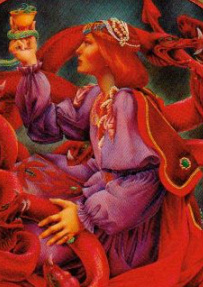 
"And the woman was arrayed in purple and scarlet colour, and decked with gold and precious stones and pearls, having a golden cup in her hand full of abominations and filthiness of her fornication:"

Revelation 17:5  "And upon her forehead was a name written, MYSTERY, BABYLON THE GREAT, THE MOTHER OF HARLOTS AND ABOMINATIONS OF THE EARTH."

Note the emphasis on the Female - HER forehead; MOTHER of Harlots.  Mystery Babylon is a religion of the Goddess...


The Mystery Religions stem from Babylon, and Egypt (always a picture of Sin in the Bible).

It's not a 'sound faith'.  It is a mixture of false spirituality and pagan mystery religions - it is filled with idols and idolatry. 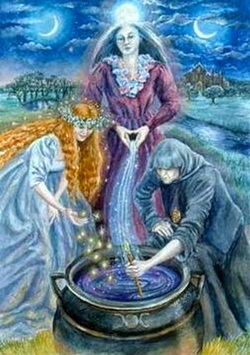 
The official "Red Hat Society Day" is April 25 each year, the supposed date of the 'first tea'.

The date of April 25 may also have other implications:

In the Church calendar, Easter always falls on a Sunday between March 22 and April 25.

Easter is not celebrated on a fixed day such as it would have been for Christ's Resurrection.

Instead, it is a moveable date based on astronomical calculations of the first full moon after the March equinox.

It is also interesting to note that the Wiccan 'unholy' Trinity of the Maiden, Mother and Crone is symbolized by the phases of the moon.

The name of Easter derives from Eostre or Ostara (or Morning Star), a form of the female goddess of the dawn ( -Sunrise Service?).


Pagan worship often involves the observance of the Sun, Moon, and Stars.  The moon itself is often seen as 'female'.

The date of April 25 gives us a last possible date for the Full Moon after the Spring Equinox.

It seems a fitting day to commemorate to the founding of a society dedicated to the last phase of a woman's lifetime.


Coincidence?  Perhaps.  But, probably not.


Could the Red Hat Society be part of a larger movement to, "Bring the Goddess back into society and all aspects of the Sacred Feminine."

This statement is from the pagan wiccan website, Witchvox - which also sells many Red Hat Society items.     - by Moyen Agee

Revelation 18:4  "Come out of her, my people, that ye be not partakers of her sins, and that ye receive not of her plagues."

"The Road of Life is Wide, and Leads Everywhere to Destruction..."

Why Does All This Matter?

The main reason it matters is that being in the Red Hat Society is really just one more distraction in life.  It's a distraction from what really matters.

It's keeping you from taking an honest look at your spiritual condition.


And, it's a distraction that is coming in the latter part of life when one might perhaps finally be a little more introspective.

By flitting around with 'friends' in frivolous activities, you're holding your conscience out at arms-length (yet again).

You will gain the false confidence that all is well, when it may not be - that you're 'doing something', when you're really not.


Consider the words of this well-known poem by Francis Thompson: 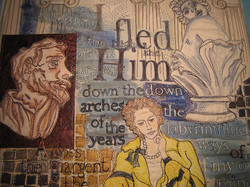 I fled Him...
THE HOUND OF HEAVEN

Work: Ladies, for most of you know you really didn’t have to, and that working outside the home is not even the Biblical model for a woman.

You really haven't had all that much time to think about God.

But now, life has become a little slower.  So, instead of making an honest assessment of your soul, you find one more distraction:


The Red Hat Society!  - With its "jam-packed Events Calendar and 'fun' Activities.


Don't Let This Happen to You!

Whether you have lived a good life up to now or not - why blow it all now?