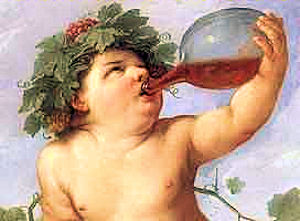 The custom of using a baby to symbolize the New Year began in Greece around 600 B.C. The Greeks celebrated their God of Wine, Dionysus, by parading a baby in a basket to represent the annual rebirth of Dionysus as the spirit of fertility. The early Egyptians also used the baby as a symbol of rebirth.

Although the early Christians denounced the practice of using a baby as being pagan in nature, its significance as a personification of rebirth later forced the Church to reevaluate its position. Eventually, it was decreed that Church members would be permitted to celebrate the New Year using a symbolic baby, provided it illustrated the birth of the baby Jesus.

The use of a baby's image as a banner for New Year celebrations was brought to America by the Germans, who had used the effigy since the Fourteenth Century.