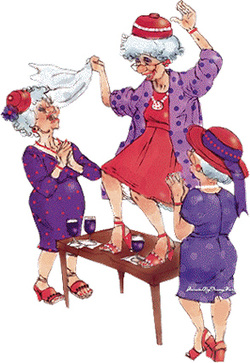 
Titus 2:3-5  "The aged women likewise, that they be in behaviour as becometh holiness, not false accusers, not given to much wine, teachers of good things; That they may teach the young women to be sober, to love their husbands, to love their children,  To be discreet, chaste, keepers at home, good, obedient to their own husbands, that the word of God be not blasphemed."


"The Road of Life is Wide, and Leads Everywhere to Destruction." 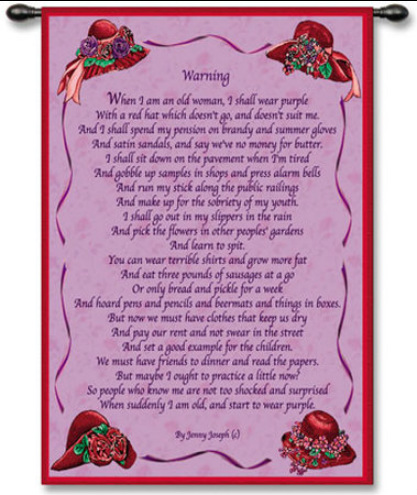 The First stirrings of 'the poem' in America


The widespread acknowledged use of the poem in America started in the 1980's. Elizabeth Lucas was first granted exclusive publishing rights to the copyrighted poem "When I Am An Old Woman" for greeting cards in 1984. Then Liz Carpenter, who had been Lady Bird Johnson's press officer, wrote an article for the "Texas Monthly" in March 1985. It was picked up by the Reader's Digest and they acknowledged the author Jenny Joseph. From there its fame increased rapidly.


On one of Jenny Joseph's trips to California to meet with Elizabeth Lucas, she was also invited to take part in Long Beach's Literary Women's Day and Jenny was honored for her poem as well as for being the first writer from abroad. On that occasion she met Sandra Martz, who contacted Jenny about using "Warning" as the front poem, its first line the title, of an anthology on aging. Publishing of this anthology caused an additional interest in Lucas's extremely popular cards helping "Warning" gain an ever-increasing number of fans. Over the years, interest in the poem has spread throughout the United States and the world.


Many women's groups have been formed based on the theme of the poem. Over the years ladies have visited Elizabeth Lucas Designs dressed up in purple with red hats. Elizabeth has had special events at her office during the last twenty years, including signings by Jenny Joseph. Lots of women have sent her photos of their groups wearing purple. Some have even put on plays about the poem and others have written related poetry or stories about getting older. All of this has been in the spirit of good fun!


﻿"﻿When I am an old woman I shall wear purple With a red hat which doesn't go, and doesn't suit me, And I shall spend my pension on brandy and summer gloves And satin sandals, and say we've no money for butter. I shall sit down on the pavement when I'm tired And gobble up samples in shops and press alarm bells And run my stick along the public railings And make up for the sobriety of my youth. I shall go out in my slippers in the rain And pick the flowers in other people's gardens And learn to spit. . . . But maybe I ought to practice a little now? So people who know me are not too shocked and surprised. When suddenly I am old and start to wear purple."


And then came Sue Ellen Cooper who has been dedicated at actually organizing and registering chapters across the world, and an avid Ambassador of Life really beginning at 50!  Here is her story:

While visiting a friend in Tucson several years ago, Sue Ellen impulsively bought a bright red fedora at a thrift shop, for no other reason than that it was cheap and, she thought, quite dashing. A year or two later she read the poem "Warning" by Jenny Joseph, which depicts an older woman in purple clothing with a red hat. Sue Ellen felt an immediate kinship with Ms. Joseph. She decided that her birthday gift to her dear friend, Linda Murphy, would be a vintage red hat and a copy of the poem. She has always enjoyed whimsical decorating ideas, so she thought the hat would look nice hanging on a hook next to the framed poem. Linda got so much enjoyment out of the hat and the poem that Sue Ellen gave the same gift to another friend, then another, then another.

One day it occurred to these friends that they were becoming a sort of "Red Hat Society" and that perhaps they should go out to tea... in full regalia. They decided they would find purple dresses which didn't go with their red hats to complete the poem's image.  The tea was a smashing success.

Soon, each of them thought of another woman or two she wanted to include, and they bought more red hats. Their group swelled to 18, and they began to encourage other interested people to start their own chapters (18 women don't fit well around a tea table). One of their members passed along the idea to a friend of hers in Florida, and their first "sibling" group was born.

Could world domination be far behind? 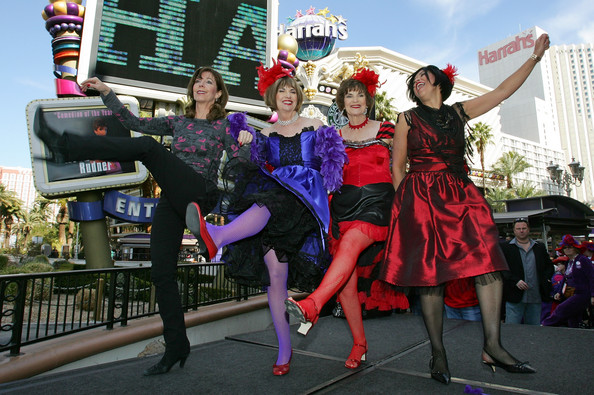 Founder & 'Exalted Queen Mother' Sue Ellen Cooper in Vegas
According to the CBS News Article below, The Red Hat Society is now the largest women's social group in the world.

FULLERTON, Ca. - A popular women's rights movement lives by the credo that women have a right to enjoy life no matter their age.

The fabulous red-hat ladies -- members of the largest women's social group in the world -- recently gathered at a convention in Laughlin, Nevada.

They're not volunteers, not raising money or seeking a cure to anything but boredom. Women of a certain age -- most are over 50 -- can just put on a bright red hat and join in.

"It's a sisterhood; We get to dress in all our bling; You've got to get out, and you've got to laugh."

The original mad hatter and founder, Sue Ellen Cooper, was inspired by a poem, "Warning", about a woman who vows to do her own thing when she gets older.

While it's a movement that not everyone understands, the Red Hat Society now has 70,000 members and 20,000 chapters in 26 countries, all coordinated from hat-quarters in Fullerton, Calif.

"Every club is different; Some like teas. Some like going to the theater. Any woman can start a chapter."

"It keeps me young."  That's a neat hat trick at any age.