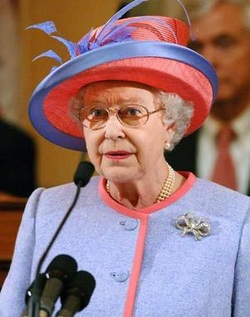 The Real 'Exalted Queen Mother' of RHS?
When Queen Elizabeth II was on the news yesterday, shown visiting Jamestown in Virginia, she was wearing what was an obvious "Red Hat Society" outfit with a lavender dress and red hat w/purple trim.

I have little doubt about the Queen's occult
and Masonic connections, but I have also uncovered some things about the Red Hat Society that, though seemingly mundane* and harmless (to some) from the outside - is at the very least, unscriptural and even rebellious to the Word of God.


*MUNDANE: 1. Of, relating to, or typical of this world; secular. WORLDLY 2. Relating to, characteristic of, or concerned with commonplaces; ordinary.

The 'Red-Hatters' do seem very harmless and commonplace for the most part, and most probably are.  But what lies at the origin of the group is the real concern.

(FYI - Jenny Joseph, the author of the poem 'Warning' that was the catalyst for the Red Hat Society was also British.)

Queen Elizabeth's possible connection to, and endorsement of, the RHS has only deepened my concerns.  As for the foundation and premise of the Red Hat Society being unscriptural, compare the poem below, "Warning...," to the command given to 'older women' in Titus 2:3-5.

I have also researched some information and pictures regarding the use of purple robes (and red hats) in the practice of witchcraft.  For instance, the witch who 'consecrated' the New Age / Masonic Georgia Guide Stones is said to have donned a purple robe especially for this ceremony. 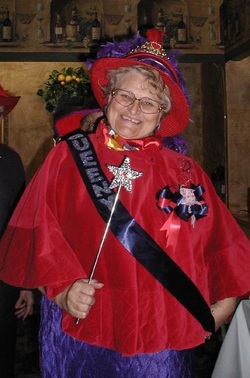 RHS 'QUEENY'
*This was on another website forum regarding the Red Hat Society:

"Hey, I found this page while googling 'red hat' + 'pagan'. I love the idea of the Red Dragon Ladies; I was thinking of starting a Red Pointy Hat Society. But no dress code, except maybe 'mix it up!'

Speaking of pointy hats, there's a Daughter of Eris Red-Hat chapter (in Greek mythology, the goddess of discord)

And a Lesbian 'Amazon Red Hat' chapter, both in Illinois. Those came up on another google search, too." 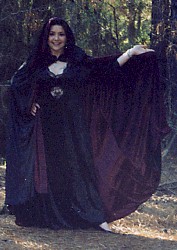 "This is the age of the Goddess, baby!’ Fair enough, and it’s only right we do bring the Goddess back into society and all aspects of the Sacred Feminine."


Why 'All Hail' to the RHS from a Wiccan Society?  Does it represent the Crone in pagan Wiccan belief?

The Red Hat Society may therefore be part of a larger movement to, "Bring the Goddess back into society and all aspects of the Sacred Feminine," as stated above.

And lastly, this article on the Red Hat Society's participation in a Halloween celebration: 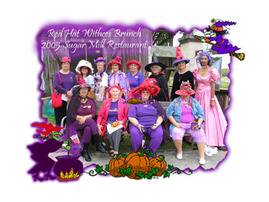 
Members of the Red Hat Society are known for their outlandish red hats and purple dresses.

At Halloween the ladies use the same color scheme-- but achieve a very different look.

The ladies dressed in red and purple costumes for their Halloween Party in Knoxville. Many women dressed as witches with tall purple hats.

The Red Hat Society is for women over 50, who just want to have fun. 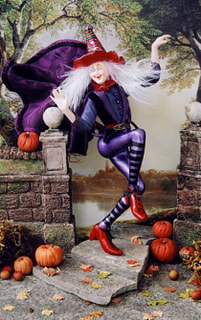 
1 Samuel 15:23  "For rebellion is as the sin of witchcraft, and stubbornness is as iniquity and idolatry. Because thou hast rejected the word of the Lord, he hath also rejected thee..."


Titus 2:3-5 "The aged women likewise, that they be in behaviour as becometh holiness, not false accusers, not given to much wine, teachers of good things; That they may teach the young women to be sober, to love their husbands, to love their children,To be discreet, chaste, keepers at home, good, obedient to their own husbands, that the word of God be not blasphemed." 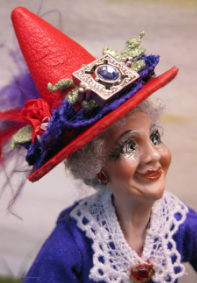 The Example Older Women Should Set:


Many of the older women of today are NOT behaving in a Biblical manner, rather just the opposite of what scripture commands.

This is also true of the younger generation as well.  They do NOT honor the elderly as the Bible says for them to do.

Everything in our society has been turned 'upside-down'.  Read the official RHS Poem below and compare it to the mandate in Titus 2:3-5. 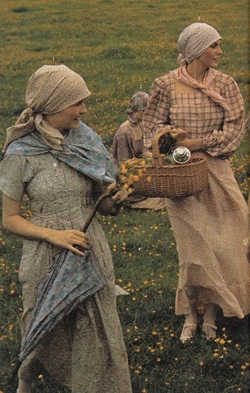 A Quiet, Wholesome Spirit
As a Contrast, see this excerpt from an article in Above Rubies entitled "Are We Blaspheming?" by Nancy Campbell


There is only one passage in the Word of God that speaks personally to older women. It is a specific command that is given to them through the unction of the Holy Spirit.

It is surprising to me that so few older women in the church bother to take any notice of these words. They live and act as though they are not mentioned in the Bible. What is this command found in Titus 2:3-5?

Not only are the older women to teach the younger women, but they are to show them by example HOW to be husband-lovers, children-lovers, and home-lovers. The Message Bible* says, "By LOOKING AT THEM, the younger women will know how to love their husbands and children…"

(Click HERE to read the rest of this article.)


*I do not personally endorse the use of the Message Bible - but the wording here makes a good point.  One would certainly get the wrong idea about how to behave as a mature Christian woman by the less than honorable activities of many Red Hat Society members:

The fact that you are blaspheming the word of God by such conduct should give anyone reason enough for great concern!


(Here is the poem "Warning..."  that supposedly "started it all" and led to the foundation of the Red Hat Society.)

Warning - When I Am an Old Woman I Shall Wear Purple

When I am an old woman, I shall wear purple

with a red hat that doesn't go, and doesn't suit me.

And I shall spend my pension on brandy and summer gloves

and satin sandles, and say we've no money for butter.

I shall sit down on the pavement when I am tired

and gobble up samples in shops and press alarm bells

and run my stick along the public railings

and make up for the sobriety of my youth.

I shall go out in my slippers in the rain

and pick the flowers in other people's gardens

and learn to spit.


You can wear terrible shirts and grow more fat

and eat three pounds of sausages at a go

or only bread and pickles for a week

and hoard pens and pencils and beer nuts and things in boxes.


But now we must have clothes that keep us dry

and pay our rent and not swear in the street

and set a good example for the children.

We must have friends to dinner and read the papers.

But maybe I ought to practice a little now?

So people who know me are not too shocked and surprised

When suddenly I am old, and start to wear purple.