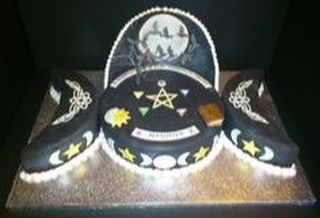 For example, one of the most well-known birthday traditions in American culture (and in many other countries around the world) is the blowing out of birthday candles to "make a wish."

Why would we even risk getting melted wax inside a cake that people would prepare themselves to eat? There are no Biblical verses to back up that tradition, and there certainly isn't any other American tradition we can connect such a thing to, so where did it come from in the first place?


Birthday candles have an origin in witchcraft, in a category called "Candle Magick." The following author is a bestselling Wiccan author who has developed her own set of tarot cards and other teachings on shamanistic witchcraft, and she explains that witches have used candle magick over the past few thousand years:

"In spell crafting, candles speak a magickal language. Their words are the flickering flame, popping wax, and curling smoke. A candle flame touches something deep within your being. It represents the spirit's highest potential while the smoke carries your wishes, prayers, and desires to the divine. Candle magick can be as simple as dedicating a candle to a god or goddess, or making a dedication by lighting a candle in memory of an ancestor or for a friend who has died. Birthday candles are still used for making magick wishes."

So Americans traditionally put candles on a cake, and the person whose birthday is being celebrated is told to "make a wish" and then blow out the candles. The resulting smoke from the candles is symbolic in witchcraft that the wishes of the person blowing out the fire would be heard by the pagan gods and goddesses.

To the Devil, it doesn't matter what your intentions are; it only matters whether or not you bring his demonic practices into your home, and witches themselves will tell you that it has nothing to do with your intentions:

"Anyone who has made a wish before blowing out birthday candles has practiced candle magic. Quick, easy, and effective, this magical art requires no religious doctrine or previous magic experience."

-Thea Sabin, Wicca for Beginners: Fundamentals of Philosophy & Practice, Llewellyn Worldwide, 2010, ISBN: 9780738717753. (Sabin has been a witch and astrologer for most of her life, and her work has appeared in many publications around the world.)

Let's also stop and consider why we have birthday cakes. Have you ever thought about that? What does a baked cake with icing have to do with birthdays at all?

Most people never even question it because they're so used to the tradition, but it really doesn't make any sense how those two things are connected--unless we look at the traditions of witchcraft. The following author was a 20-year veteran witch, and very highly regarded among witch covens:


"Offering a special cake to a person enjoying a birthday is a custom of obscure origin, but almost certainly is meant to magically ensure that the recipient won't suffer poverty or hunger during the coming year...

Created from sacred foods (grains, butter, sugar, and eggs), cakes are uniquely linked with the divine and are perfect gifts on birthdays. Why do we write on special-occasion foods, such as birthday cakes?

This involves the idea that the act of eating words (even those created out of icing) magically transfers the energies represented by those words to their eaters. 'Happy Birthday' and 'Good Luck' carefully written on cakes were originally more than kind gestures--they were ritual assurances of just these things...

Blowing out the candles and 'making a wish' are obviously remnants of forgotten magical rituals--perhaps those performed to gain the favor of Artemis. The next time you're presented with a candlelit cake, visualize your wish as you blow."

-Scott Cunningham, Cunningham's Encyclopedia of Wicca in the Kitchen, Llewellyn Worldwide, 2012, ISBN: 9780738717111; (Cunningham has practiced magic for over 20 years and authored more than 50 books on the subject.)

So now we can see why cakes were given as gifts specifically on birthdays, and were also done for special occasions like weddings and anniversaries; they were rituals designed to not only infuse the "luck" of the pagan gods into a person or people who the cake was given to, but also to help magically infuse the concept of pagan energies into a person eating the cake via the words written on it.

The visualization techniques used in sorcery are applied to the birthday tradition because it is common to tell someone to, "Close your eyes, make a wish, and blow out the candles."

The word 'sorcery' is the root where we get the word 'pharmakeia', which is the root word for 'pharmaceutical', and many sorcerers today still use drugs to help them enter into visualization trances. The closing of the eyes is the sorcerer's practice of visualizing in your mind what you desire in effort to materialize it.

"Wiccans use visualization constantly in magic and energy work. In Wicca, visualization means creating a picture in your mind's eye of what you want to happen. There is a magical idea that 'energy follows thought.' What that means is that if you create and see something in your mind, that image attracts energy, and whatever you're picturing begins to become a reality."

-Thea Sabin, Wicca for Beginners: Fundamentals of Philosophy & Practice, Llewellyn Worldwide, 2010, p. 47, ISBN: 9780738717753; Sabin has been a witch and astrologer for most of her life, and her work has appeared in many publications around the world.

Please consider that the reason witches do this is not because it's just some wacky religious practice that passes the time; they get results from their magic. After all, the Devil will give them what material things they seek, so long as it keeps them from the truth of God's Word.

This stuff is very dangerous because it will invoke demons to do your bidding, and many businesses teach people these sorcery techniques of visualization; although it can produce results in someone who puts their faith into the sorcery, it's not worth selling your soul over.

To give an example of connecting the concept of visualization sorcery and candle witchcraft, an online store called "The White Witch Parlour" published an image that showed someone holding a candle, and said:

"When it comes to healing, spells, rituals or prayers, the key to successful progress is to visualize the person or animal being better & in full health. Don't focus on them being sick or weak. See them in a state of full recovery & happiness."


The context "healing witchcraft" talked about in this quote is irrelevant because I'm simply showing an example of what witches/sorcerers do. The Lord God hates these visualization techniques taught by pagans.

"Hold the candle in your hands and visualize the final result of your magical working. Imagine that the visualization transfers to the candle... and light it."


The fact is that Visualization techniques and Candle Magic go hand-in-glove. This visualization witchcraft (i.e. close your eyes and make a wish) is the "mind energy" transferred into the fire of the candle, and the smoke then sends it up to the pagan gods and goddesses to receive a witch's blessings.


For the pagan, these birthday rituals are forms of witchcraft and idolatry.

This is the origin of the birthday traditions many of us grew up learning and ignorantly participated in.

Some timely warnings from God's Word:


"But the fearful, and unbelieving, and the abominable, and murderers, and whoremongers, and sorcerers, and idolaters, and all liars, shall have their part in the lake which burneth with fire and brimstone: which is the second death."  (Revelation 21:8)


"Now the works of the flesh are manifest, which are these; Adultery, fornication, uncleanness, lasciviousness, Idolatry, witchcraft, hatred, variance, emulations, wrath, strife, seditions, heresies, Envyings, murders, drunkenness, revellings, and such like: of the which I tell you before, as I have also told you in time past, that they which do such things shall not inherit the kingdom of God."  (Galatians 5:19-21)