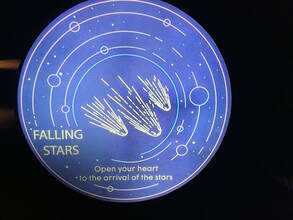 A limited time event is scheduled for Anakeesta park in Gatlinburg, TN opening October 21, 2022. It is billed as 'An Enchanted Night Walk Amongst the Stars', but the message goes far deeper than that.

The attraction features illuminated sign posts along the way of your 'Star Walk' that tell you the story of 'Fallen Stars' that visit the Earth for a night and then ascend back to the night sky.
These 'falling stars' are mentioned in the Bible as the Fallen Angels. When the stars 'fall' from heaven, it will not be a good thing:

"Immediately after the tribulation of those days shall the sun be darkened, and the moon shall not give her light, and the stars shall fall from heaven, and the powers of the heavens shall be shaken." Matthew 24:29

"And the great dragon was cast out, that old serpent, called the Devil, and Satan, which deceiveth the whole world: he was cast out into the earth, and his angels were cast out with him. And his tail drew the third part of the stars of heaven, and did cast them to the earth:"
Revelation 12:4 & Revelation 12:9


There were many angels who 'fell', but the chief among them was Lucifer:

How art thou fallen from heaven, O Lucifer, son of the morning! how art thou cut down to the ground, which didst weaken the nations! Isaiah 14:12


The Astra Lumina experience says that the stars that fall will return to their 'rightful place' in the night sky - but the fallen stars / angels will never be able or allowed to return:

"And the angels which kept not their first estate, but left their own habitation, he hath reserved in everlasting chains under darkness unto the judgment of the great day." Jude 1:6  (Their 'first estate' was heaven, before they were fallen.)


What did these fallen angels 'sons of God' / fallen host of heaven / fallen stars do that was so wicked and an 'abomination' in the sight of God?


The offspring of the fallen 'sons of God' (angels/stars) and human women were no longer just human. They were the giants of old and no longer had pure human DNA. So widespread was this sin that in the end only Noah was found perfect in his generations (genetics).

God had given the entire world a chance, but all rebelled against God except for Noah and so only he and his wife, Noah's 3 sons and their wives were saved from the Great Flood that destroyed the entire defiled population of the earth.


Some of the signposts along the Astra Lumina walk read, "We're always told to reach for the stars, but what if the stars could reach for us?" And that it is a place, "Where humans and stars are united by a common light."

This light is from Lucifer (Satan), the 'light bearer' - "And no marvel; for Satan himself is transformed into an angel of light." 2 Corinthians 11:14


Other of the signposts read, "Falling Stars: Open your heart to the arrival of the stars." (Do not open yourself up to this!). And, "Rise of the Stars: Look up to the sky as the stars return to their rightful home."

This entire Enchanted Night Walk is meant to subtly make people believe that fallen stars have freedom from the consequence of their rebellion against God, and that therefore we might also.


Fallen angels can, and do, however interact with the earth and its inhabitants, often as 'familiar spirits' - but again, it's never a good thing:

"Be sober, be vigilant; because your adversary the devil, as a roaring lion, walketh about, seeking whom he may devour:" 1 Peter 5:8


"Now the serpent was more subtil than any beast of the field which the Lord God had made." Genesis 3:1  (the serpent: the devil)

"There shall not be found among you any one that ... useth divination, or an observer of times, or an enchanter, or a witch." Deuteronomy 18:10

Below is the description of Astra Lumina from the Anakeesta.com website:

ASTRA LUMINA - AN ENCHANTED NIGHT WALK AMONGST THE STARS

The stars are descending from the night sky, right here at Anakeesta!
Set off across mysterious observatory grounds to discover a celestial pathway of lustrous light, cosmic visions, and astral song.

Immerse yourself in illuminating encounters of lighting, projection and sound, and connect with the stars before they return to the sky above.

Astra Lumina at Anakeesta is the 15th experience in the Lumina Enchanted Night Walk series, and the very first in the United States.

Did you know there is an extraordinary place right here on earth that holds a special connection to the stars above?

Come nightfall, mysterious observatory grounds set the stage for a phenomenal event: a visit from the stars.

While here, the fallen stars release an astral energy that transforms the forest into a celestial pathway for humans to discover.

As the night unfolds, the stars regenerate, rise and reunite in the night sky, to shine brighter than ever before.

Astra Lumina is the 15th experience in the Lumina Enchanted Night Walk series and the very first in the United States.