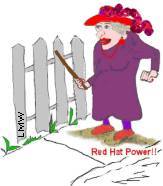 
Titus 2:3-5 "The aged women likewise, that they be in behaviour as becometh holiness, not false accusers, not given to much wine, teachers of good things; That they may teach the young women to be sober, to love their husbands, to love their children,  To be discreet, chaste, keepers at home, good, obedient to their own husbands, that the word of God be not blasphemed."

Many of the older women of today are NOT behaving in a Biblical manner, but rather just the opposite of what scripture commands.

This is also true of the younger generation as well.  They do NOT honor the elderly as the Bible says for them to do.

Everything in our society has been turned 'upside-down'.  Read the official RHS Poem below and compare it to the mandate in Titus 2:3-5. 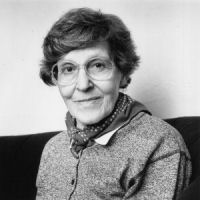 JENNY JOSEPH
History of the Poem - About the Author, Jenny Joseph:

Jenny Joseph was born in 1932 in Birmingham, England and was first published by John Lehmann in the 1950s. Her first book of poems, The Unlooked-for Season (Scorpion Press 1960) won her a Gregory Award and she won a Cholmondeley Award for her second collection, Rose in the Afternoon (Dent 1974). Two further collections followed from Secker, The Thinking Heart (1978) and Beyond Descartes (1983). Her Selected Poems (Bloodaxe 1992) contains poems from all these books.

Her other books include Persephone (Bloodaxe 1980), a fiction in prose and poetry, winner of the James Tait Black Memorial Prize; The Inland Sea (Papier-Mache Press 1989), her first American book; Beached Boats (Enitharmon 1991), a collaboration with photographer Robert Mitchell; Ghosts and Other Company (Bloodaxe 1995), a poem from which won the 1995 Forward Prize for Poetry; Extended Similes (Bloodaxe 1997), a prose work; and All the Things I See, a selection for children of her poetry, (Macmillan 2000). Her best-known poem Warning was voted the Nation's Favorite Poem in a BBC poll in 1996 and is anthologized worldwide.

In 1996 she was awarded an Arts Council Traveling Scholarship which enabled her to spend time in Austria and Eastern Europe, exploring her interest in translation. A number of her poems have been used in song cycles and choral works in Great Britain and in the USA. She lives in Gloucestershire and she has recently completed working on a book about gardening and smell titled "Led By The Nose".

Jenny received a scholarship to Oxford University, UK, in 1950, and she later trained as a newspaper reporter. She spent 18 months in South Africa before her first book ("The Unlooked-for Season", Scorpion Press, 1960) was published. Six children's books followed.

She has done various jobs, from lecturing in English literature and language to being a pub landlady; she has published prose and poetry, and worked with photographers, painters, musicians, and actors.

Her work is known and praised by readers and critics worldwide. Her literary agent is located in London, England.

Joseph, Jenny (in earlier publications: "Jennie") (b.1932). This British contemporary author was awarded the "Forward Poetry Prize" in 1996 in the category "Best individual poem" for "In Honour of Love". Joseph has published numerous collections of poetry and fiction, including "The Unlooked-for Season" (1960 - winner of a Gregory Award), "Rose in the Afternoon" (1974 - winner of a Cholmondeley Award), "The Thinking Heart" (1978), "Beyond Descartes" (1983), "Persepone" (1986 - fiction in verse and prose), "Beached Boats" (1992 - prose), "The Inland Sea" (1992), "Selected Poems" (1992 - which includes "Warning"), "Ghosts and Other Company" (1996), and "Extended Similes" (1997 - prose fiction). In 1996 she was honored in a national poll as the author of the U.K.'s "most popular post-war poem", "Warning", which begins: "When I Am An Old Woman, I Shall Wear Purple." She gives occasional readings of her poetry in Britain, and toured the U.S. in 1995. Jenny Joseph lives in Gloucestershire, England. Yale University professor Claude Rawson has called her "the best of the unfashionable poets."

Warning: When I Am An Old Woman

I shall wear purple
With a red hat which doesn't go, and doesn't suit me
And I shall spend my pension on brandy and summer gloves
And satin sandals, and say we've no money for butter.
I shall sit down on the pavement when I'm tired
And gobble up samples in shops and press alarm bells
And run my stick along the public railings
And make up for the sobriety of my youth.
I shall go out in my slippers in the rain
And pick the flowers in other people's gardens
And learn to spit.

You can wear terrible shirts and grow more fat
And eat three pounds of sausages at a go
Or only bread and a pickle for a week
And hoard pens and pencils and beermats and things in boxes.
But (for) now we must have clothes that keep us dry
And pay our rent and not swear in the street
And set a good example for the children.
We will have friends to dinner and read the papers.
But maybe I ought to practice a little now?
So people who know me are not too shocked and surprised
When suddenly I am old and start to wear purple.

I'll write on the wall with reds, whites and blues,
And bounce on the furniture wearing my shoes.
I'll drink from the carton and then leave it out.
I'll stuff all the toilets and oh, how they'll shout!
(When I'm an old lady and live with my kids)

When they're on the phone and just out of reach,
I'll get into things like sugar and bleach,
Oh, they'll snap their fingers and then shake their head,
And when that is done I'll hide under the bed!
(When I'm an old lady and live with my kids)

When they cook dinner and call me to eat,
I'll not eat my green beans or salad or meat.
I'll gag on my okra, spill milk on the table,
And when they get angry I'll run... if I'm able!
(When I'm an old lady and live with my kids)

I'll sit close to the TV, through the channels I'll click,
I'll cross both my eyes just to see if they stick.
I'll take off my socks and throw one away,
And play in the mud 'til the end of the day!
(When I'm an old lady and live with my kids)

And later in bed, I'll lay back and sigh,
I'll thank God in prayer and then close my eyes.
My kids will look down with a smile slowly creeping,
And say with a groan. "She's so sweet . when she's sleeping!"
(When I'm an old lady and live with my kids)